For several years, companies have been actively using AI to recruit and hire employees. Virtual assistants simplify the process of assessing potential candidates; chatbots conduct interviews on their own and can schedule a live appointment. The traditional search for employees usually takes several days: some time passes before the HR specialist sees the response, after which they have to call the candidate to ask clarifying questions and schedule an interview. The chatbot does the same job in a matter of minutes.

As an example, the virtual recruiter developed for Sberbank (the largest bank in Russia and Eastern Europe) has reduced the time spent between finding a potential candidate and closing a vacancy to as little as two days. The applicant first speaks with the chatbot and answers the standard questions. They then take a video interview which is reviewed by an HR specialist who makes the final decision. Our HR bot for Sberbank, @Sberсruiter, is available on Facebook Messenger. 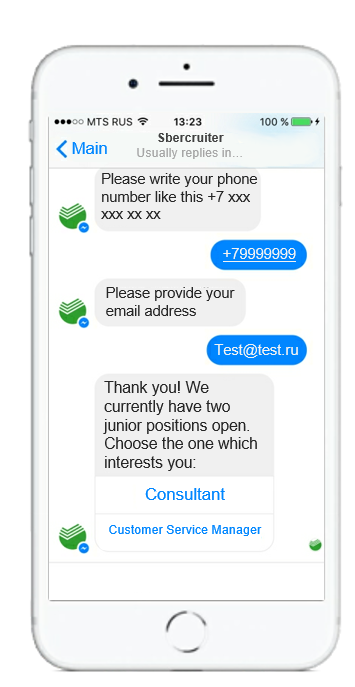 This chatbot conducts surveys of the applicants in order to collect necessary information about them, as well as determine the date and time of the following interview. Upon the completion of the survey, the user receives an email with information on the interview. The collected data is transmitted to the video interview service, where the next stage of the selection process takes place.

Another use case of our products is our HR bot for Headhunter – a well-known Russian company specializing in online recruiting. We developed a virtual assistant named Haddy for the company in 2013. Since then, Haddy is available to applicants from the Moscow region and appears in the user’s personal account after authorization on the HH.ru website in the Help section. The chatbot informs the clients about the services and functions applicants can use to their advantage, gives advice on how to write a CV, assists users in navigating through the site and quickly finding the right section. 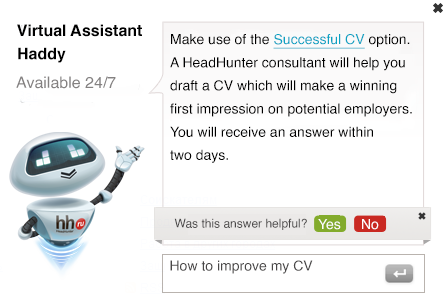 Ilya Moltyaninov, chief of HeadHunter’s mobile business, said that chatbots launched by the company in 2017 in instant messengers reduced the time spent by recruiters by 6 times. “Chatbots are used by HeadHunter to support our users. In fact, they’ve all but replaced the first line of operators. They have been working in our web chat since 2013, and in 2017 we launched them in Telegram and Viber.” Their use allowed the company to save up to 30% on resources.

In December of 2018, we made a recruitment chatbot for Rostelecom named Stepan, which is available in the social network VKontakte. Stepan takes care of the initial selection process for the position of Corporate Account Manager in the cities of Saratov / Engels, the North-West region, as well as the cities of Sakhalin.

The candidate can ask the chatbot questions about the vacancy and find out about the salary, schedule, employment technicalities, etc. The chatbot, in turn, requests information about the candidate’s (name, age, experience, willingness to relocate, etc.) The chatbot analyzes whether the applicant is suitable or not. If they meet the specified criteria, Stepan asks them for their contacts (phone and email address) and passes the information to the HR-manager in charge of the rest of the recruitment process.

As we can see, the use of conversational artificial intelligence in the sphere of recruitment contributes to faster application processing, as well as an increase in staff involvement. The chatbot acts as an intermediary helping one side to collect, process and transmit information and the other to receive, analyze and draw conclusions from it. And if we take into account the chatbots’ ability to learn and develop on their own, we can certainly expect to see a full-fledged virtual HR-manager in the future.